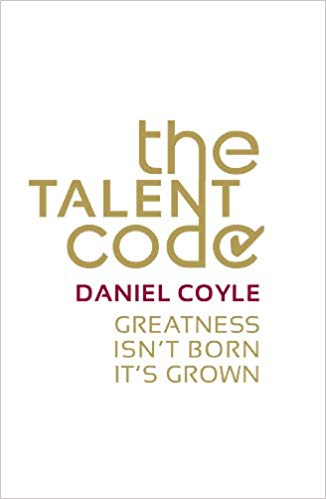 After years of research and interviews with soccer players, violinists, pilots, artists and even bank robbers, Coyle compiled practical strategies that will help you acquire any skill. Discover how you can identify your talent and develop it, whether it lies in athletics, language or even math!

Video Review of The Talent Code: Unlocking the Secret of Skill in Sports, Art, Music, Math, and Just About Everything Else by Daniel Coyle,John Farrell

Quotes & Tips from The Talent Code

We control our own talent

Although talent feels and looks predestined, in fact we have a good deal of control over what skills we develop, and we have more potential than we might ever presume to guess.

The sweet spot: that productive, uncomfortable terrain located just beyond our current abilities, where our reach exceeds our grasp. Deep practice is not simply about struggling; it’s about seeking a particular struggle, which involves a cycle of distinct actions.

Deep practice is built on a paradox: struggling in certain targeted ways—operating at the edges of your ability, where you make mistakes—makes you smarter.

Deep practice, however, doesn’t obey the same math. Spending more time is effective—but only if you’re still in the sweet spot at the edge of your capabilities, attentively building and honing circuits. What’s more, there seems to be a universal limit for how much deep practice human beings can do in a day. Ericsson’s research shows that most world-class experts—including pianists, chess players, novelists, and athletes—practice between three and five hours a day, no matter what skill they pursue.

The talent code is built on revolutionary scientific discoveries involving a neural insulator called myelin, which some neurologists now consider to be the holy grail of acquiring skill. Here’s why. Every human skill, whether it’s playing baseball or playing Bach, is created by chains of nerve fibers carrying a tiny electrical impulse—basically, a signal traveling through a circuit. Myelin’s vital role is to wrap those nerve fibers the same way that rubber insulation wraps a copper wire, making the signal stronger and faster by preventing the electrical impulses from leaking out. When we fire our circuits in the right way—when we practice swinging that bat or playing that note—our myelin responds by wrapping layers of insulation around that neural circuit, each new layer adding a bit more skill and speed. The thicker the myelin gets, the better it insulates, and the faster and more accurate our movements and thoughts become.

Once a skill circuit is insulated, you can’t un-insulate it (except through age or disease). That’s why habits are hard to break. The only way to change them is to build new habits by repeating new behaviors—by myelinating new circuits.

The importance of struggle

Struggle is not optional—it’s neurologically required: in order to get your skill circuit to fire optimally, you must by definition fire the circuit suboptimally; you must make mistakes and pay attention to those mistakes; you must slowly teach your circuit. You must also keep firing that circuit—i.e., practicing—in order to keep myelin functioning properly. After all, myelin is living tissue.

“First, Dweck gave every child a test that consisted of fairly easy puzzles. Afterward the researcher informed all the children of their scores, adding a single six-word sentence of praise. Half of the kids were praised for their intelligence (“You must be smart at this”), and half were praised for their effort (“You must have worked really hard”). The kids were tested a second time, but this time they were offered a choice between a harder test and an easier test. Ninety percent of the kids who’d been praised for their effort chose the harder test. A majority of the kids who’d been praised for their intelligence, on the other hand, chose the easy test. Why? “When we praise children for their intelligence,” Dweck wrote, “we tell them that’s the name of the game: look smart, don’t risk making mistakes.” The third level of tests was uniformly harder; none of the kids did well. However, the two groups of kids—the praised-for-effort group and the praised-for-intelligence group—responded very differently to the situation. “[The effort group] dug in and grew very involved with the test, trying solutions, testing strategies,” Dweck said. “They later said they liked it. But the group praised for its intelligence hated the harder test. They took it as proof they weren’t smart.” 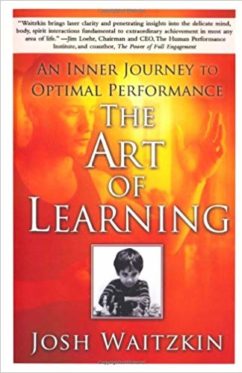 The Art of Learning: A Journey in the Pursuit of Excellence

Becoming a World Champion in two extreme disciplines — chess and Tai Chi — made Josh Waitzkin realize that it isn’t chess or Tai Chi that he is good at. Rather, it is the art of learning. In this book, he uses his own life to explain how emotions can be used to fuel your creativity, how your weaknesses can be made into strengths, and many more life-changing lessons.

The Personal MBA: Master the Art of Business

An MBA will only teach you how to make a good Powerpoint presentation and some outdated and irrelevant financial models. Josh Kauffman gives you advice and information on how you can run a real business, unlike those that exist in textbooks. Save hundreds of dollars and learn something that can truly benefit you through Kauffman’s The Personal MBA.